There are games that I find it very difficult to review and write about, not because they are bad in some way, but quite the opposite. A good title inspires me rather to actually play, instead of sitting at a keyboard typing. Staring at the screen, my mind wanders as I reference rules whilst various impressions of game play sneak in like an old miscreant childhood friend whispering “c’mon let’s set it up again”. Next thing I know I’m pushing counters about mumbling to myself, lost in the battle before me.
The Grunwald Swords is such a game. It draws me to the table with its simple yet subtle play style again and again, encouraging me to ignore the little things in life such as food and rest.

This light war game represents the very bloody battle of Tannenburg/Grunwald in 1410 between the Teutonic Order and the king of Poland Wladyslaw and his Lithuanian allies. A battle of which I was somewhat ignorant until now.

Produced by Hollandspiele, and designed by Tom Russell, the game is a low complexity, quick playing title, that is driven by a simple and direct set of rules named Shields & Swords II. This rule set will be used in future games in the series so once learned a player can easily transition from one title to another with little difficulty.

When I say simple, I mean it.The rule book is no more than four and half pages all told.They are written clearly and orderly which makes referencing them quite easy.Though after the first play or two I found that the rule book lay idle with familiarity.

The components for this title surprised me with their quality. As Hollandspiele is a new and rather small gaming company producing titles for about $30 US I would have expected them to cut corners and cost in this area.They did not.The laser cut counters are thick and printed well, i.e. no off set. Colors are sharp and the art on the counters clear, though one or two of my Teutons did appear to be a bit blurry.The map consists of two,10.25″ wide x 16.5″ long thick paper stock sheets with defined hex overlays, which will have to be placed under plastic to keep it flat during play. The colors and art on the map itself are pleasing.Terrain plays a very small role in the game itself so many of the features on the map are purely aesthetic.

The game also comes with a single eight sided die, for combat resolution, the rule book of course, and a second booklet of of notes on the history of the battle. All of this fits inside a rather sturdy box, (I love my boxes) printed with a sort of retro design that appeals to me. Simple sometimes is more elegant.The crown jewel of this package though is the historical write up by the designer Tom Russell. It had me chuckling and smirking throughout as he has a way of making a seemingly grim topic, amusing.The only negative thing I found as to components is that the rules and history write up books are slightly larger than the box itself, thus I have to fish around a bit to get them out without damage.

Rules:
The battle is played in a series of alternating turns until the victory conditions are met. Each turn is broken up into three phases:

1. Command Phase, this is where a player issues two commands to any single wing of their army. Wings are easily identified by the color of the counters for example: the Allies have four wings Red Poles, Pink Poles, Yellow infantry, and Orange Lithuanian. Each player has three double sided command chits to chose from.These commands will dictate what the units will do in the next phase.

2. Action Phase, Commands issued are executed in the following order.

So as an example if the Allied player issues a Horse command and, a Move command to a wing all heavy and light cavalry would move and attack, then once attacks are resolved all units in the wing including the previously ordered cavalry can move again.
Combat resolution, the heart of any war game, is achieved in a rather smart way which is quick and neat in execution. First the attacker determines the Combat Class of the unit that he or she is attacking with. Each unit has a base class A, B, C, etc. printed on it, this class indicates how effective the troops in that formation are. A. being top notch, D. being axe fodder (Tom Russell’s term), this value of the attacking unit dictates which row on the CRT the active player will use, higher the class better the odds of doing damage.There are opportunities to modify the class of the attacking unit up or down one level i.e. from B to A or vice versa. For example; a unit attacking down hill would have his/her units class go up one.

Once Class is determined then you look to see if there are any DRM (Die Roll Modifiers) that can be applied to the combat die. This is done by cross referencing the attacking unit type vs. the defending unit type on the unit modifier matrix printed on the back of the rule book. It actually is easier than it sounds. Heavy Horse, attacking Veteran Infantry receive no DRM either way but, HH attacking Light horse receive a -1 (good). The matrix is clear and simple, leaving no room for error on this account. You can also receive DRMs by attacking with more than one unit on a single target which I suggest doing as often as possible.

After that its a matter of rolling an eight sided die applying DRM if any and looking at the combat results table for the outcome. Effects can be anywhere from no effect, a retreat, a step loss or even unit elimination. Quick, neat, and efficient.

3. Initiative Phase. If a player holds the initiative marker they may “Declare Initiative” at the end of his/her turn. In so doing that player will pass the marker to his/her opponent and then take another complete turn starting with the command phase. Initiative allows the player to follow up a breakthrough assault or to perform a second push. Conversely it also now allows the other player to call initiative next round as they are in control of the marker.

Once all phases are complete the play passes to your opponent and the cycle begins again.

Victory conditions are simple; Teutonic player needs to have 30VP and at least 10 more than the allied player to win. The Poles need to have 35VP or have captured the Teutonic camp. Victory points are awarded for eliminating units thus this battle gets bloody very quickly. Each player checks for Victory conditions at the end of his opponent’s turn before they can declare initiative. If they have achieved victory the game ends. 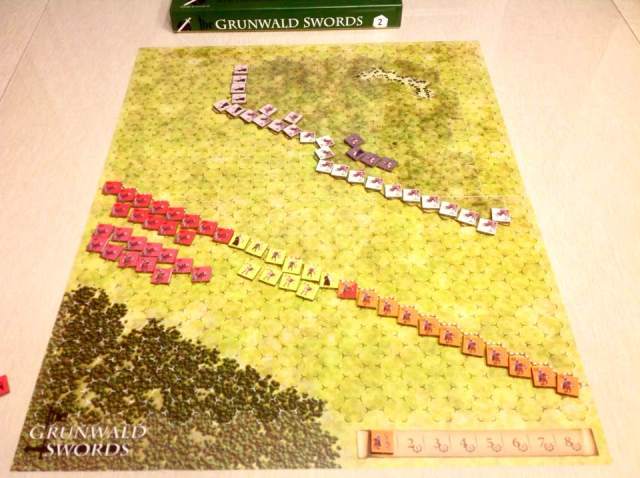 So by now it should be obvious to the reader that I really enjoy this game. At first I was a bit taken aback by the lack of terrain modifiers in the Shields & Swords II system. Where were all my charts and tables to fumble over? Yet after playing a few matches I realized that the game itself isn’t designed to be a static “defender hold” attacker break the line situation. The sheer amount of cavalry units on both sides forces one to be bold, to press the advantage wherever it can be had and to quite simply, destroy the enemy at every turn.There is a unique mechanic in Grunwald Swords that creates a rather interesting but puzzling situation. After turn four the Allied player can declare initiative and call on his Lithuanian wing to retreat from the battle. These units are not lost as they can come back later in the game awarding victory points when they do. This historically inspired situation puts pressure on both sides.

When do I as the Allied player pull them out? if I wait too long they may be reduced from combat so much that when they do reform later they will have no impact, if too soon the points awarded are almost not worth the effort. As the Teuton do I rush forth to slaughter the Lithuanian before they can run? or do I focus my efforts on the tougher Polish heavy horse to the right? Thereby weakening the overall strength of the allies in a bid to obtain enough VPs early. Do I keep a reserve if so how much? Can my infantry hold the line long enough to keep the Polish Reserve cavalry from taking the camp?

The command phase is fun to work through as figuring out the best combination of orders to suit the situation, though seemingly simple, can be tough. Choose wrong and you can find yourself spread across to board being chewed up piece meal. (yes I had that happen) Choose right, and you can see victory there through the dust. More than once have I been surprised by the subtle depth and difficulty of this phase.

And don’t even get me started on the Initiative Phase with all of it’s options once a player Declares. There is more going on in this little title than meets the eye and I suppose that was/is the point. This one also plays really well solitaire as there is little to no hidden information. Anyone who has soloed a two player war game can easily slip into this title and series.

So no surprise here, I cannot recommend Grunwald Swords and its game engine Sword and Shields II enough. This one is a keeper.